ASUS, the industry leader in PC gaming, has predictably upped the ante with their impressive new lineup of ASUS ROG (Republic of Gamers) gaming laptops.

A week ago we joined a diverse collection of tech journalists from around the world in New York to get an up close look at the new machines. A keynote presentation featuring several ASUS design and technology innovations and an overview of the new laptops, was followed by an extended hands-on session with all the new devices.

One unavoidable, and beautiful, fact when it comes to gaming computers: they get better, faster every year, at all price points. The searing performance of gaming laptops in 2019 has really made the decision between a desktop PC and a portable laptop tougher, or easier, as current laptops can handle almost anything game designers throw at them.

And facing a hardcore gaming audience with a penchant for cool-looking machines, ASUS did not disappoint. Overall, this is the most satisfying lineups of gaming laptops we’ve ever seen, as there really is something for everyone to get excited about, both on an aesthetic level and from a performance point of view. 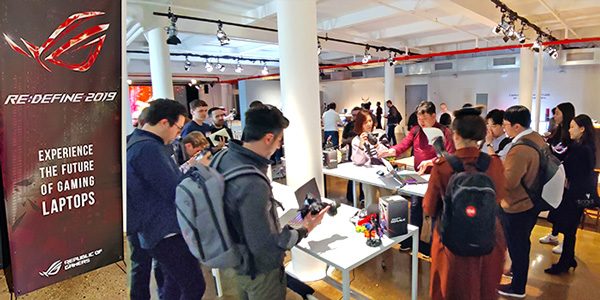 An overview of ASUS ROG new laptops for Spring 2019

The Zephyrus lineup probably impressed us the most. These are the ultra slim entrants from ASUS and they were visually beautiful machines, and surprisingly sturdy. Beyond the pleasing design aspects and portability, they packed a punch in performance terms, particularly at the higher end of the lineup.

Thin is in! The Zephyrus is broken into three classes, S (high-end), M (mid-range), G (most affordable), there was a slim chassis Zephyrus for nearly everyone. 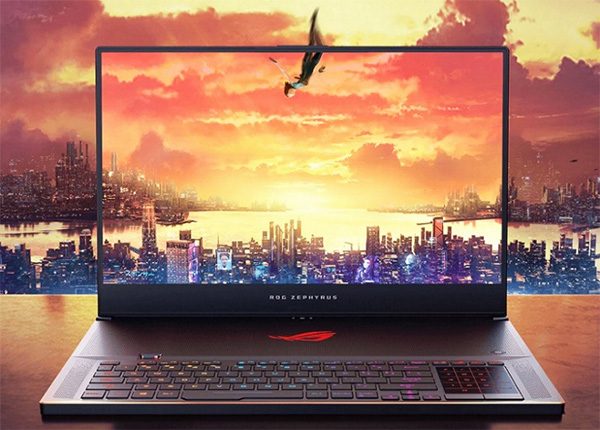 The Strix machines are designed for hard-core gamers and they trade in a bit of the Zephyrus thinness, coming in at 26mm thickness. The top-end Strix SCAR III and Strix HERO III gain new Intel Core i9 cpus, while the more affordable Strix G runs a i7. All three Strix laptop flavours come in 15″ and 17″ formats, and all run on 32GB RAMand NVidia GeForce RTX 2070 graphics. 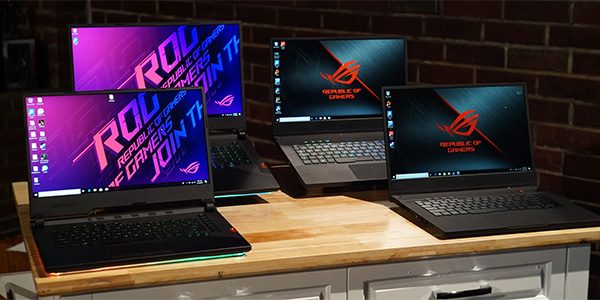 Initially revealed CES in Las Vegas this year, it was a hit, and at the launch event it once again received a lot of attention. It literally flips the design of a laptop around, putting the all components into the display, which props itself up with a kickstand, and then has a detachable keyboard (attached is good if you’re trying to avoid any keyboard latency). 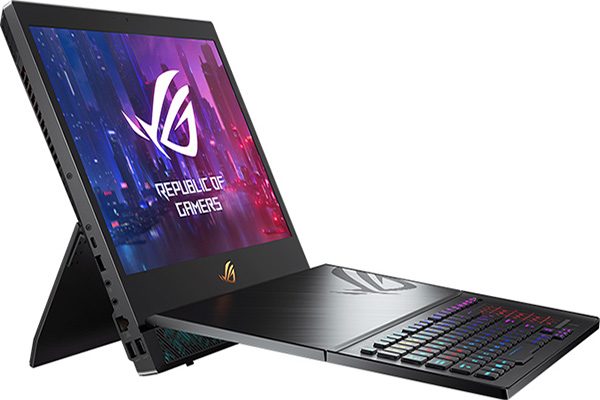 It’s an eye-catching design, and we’ll have to give it a real-world run-through when available, but with its cutting edge performance components and specs, it really stands alone (sorry, had to) as the most innovative gaming desktop replacement candidate we’ve seen. The ROG Mothership GZ700 sports top of the line 17.3″ 4K Adobe RGB display, 64GB RAM, Intel i9 processor, NVidia, RTX 2080, 3 X SSD RAID drives.

In a more traditional format, the new ROG G703 gaming beast matches the components and performance of the ROG Mothership in a 17.3″,  51mm thick clamshell chassis. 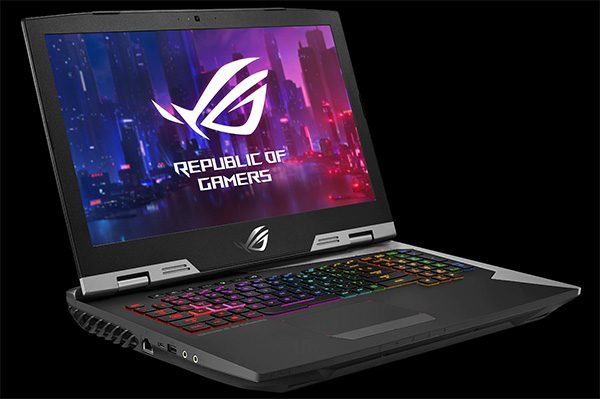 While not officially part of the ROG family, the TUF laptops seemed to fit in just fine. This are military-grade tough laptops (to MIL-STD-810G standards), built to withstand a serious amount of abuse. And thanks to increasing component performance this brutes are also in the realm of serious gaming machines. The new generation models come in 15″ FX505 and 17″ FX705 formats.

And a concept machine with BMW designers

To give us a glimpse of the future, ASUS teamed up ROG with the designers from Designworks, a BMW Group company, to create the ROG Face Off. Taking a page from the auto manufacturers buzz-worthy concept cars at auto shows, this concept laptop was indeed futuristically contoured, with an interesting combination of dynamic multi-coloured lighting and a holographic logo appearing in a shallow basin behind the forward keyboard. Fun stuff.

We currently don’t have pricing, and look forward to trying out a few of these machines in-depth but on first impressions, ASUS ROG will cement its place as the leader in the gaming laptop space, retain its loyal fanbase and gain a lot of new ones as well, especially those migrating from gaming desktops.