From small medieval towns, unbridled woodland, a fire breathing dragon and large festivals, there’s a lot more to Germany than beer, sausages and scenery – of course, it’s also rich in history, culture and tradition. Join us as we visit Regensburg, an ancient town and surrounding Bavarian countryside that has a lot to offer.

There are plenty of countries that carry the “must-see” label and Germany is certainly one of them. Germany has over 100 top-notch attractions like the Berlin Wall, Europa-park, Neuschwanstein Castle and more, but during your trip you should put aside a few days to visit the South-East side of Bavaria to live like a local. Take some time to truly indulge in German history, culture and traditions while you visit little towns that feature great food, amazing old architecturally-interesting buildings and adorable little shops along bricked roads—you won’t regret it!

Berlin is one of Europe’s most modern and cosmopolitan capitals, and yet, just two hours away by train, you find yourself in the middle of a medieval town, where nearly every building is 600 years old, thankfully there are no McDonald’s or any of their ilk, no advertising and the stones on the main road are older than your great-great-great-grandmother. This is the Medieval town of Regensburg. Because Regensburg is home to the largest number of medieval buildings listed in one German town, this city is rich in history and you can take it all in by putting on a pair of comfortable walking shoes and going to town—literally. 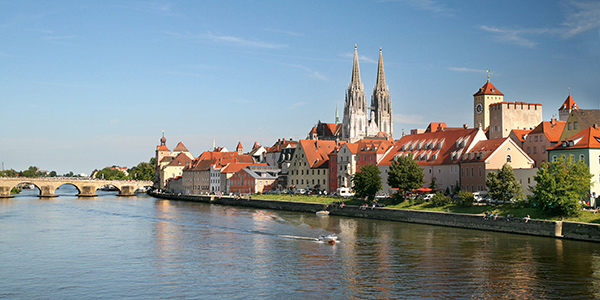 The iconic stone bridge which connects new and old Regensburg 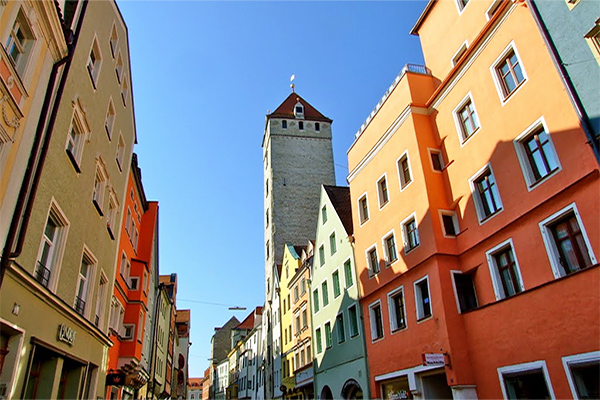 Take in the unique architectural variety of Regensburg 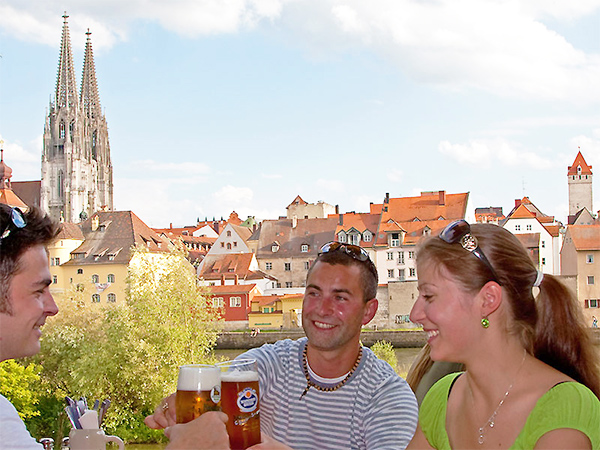 Enjoying a toast in Regensburg on a sunny afternoon

Some destinations on your bucket list could include visiting the Dom which is a huge cathedral that marvelously shows off the work of Gothic architecture in Bavaria, the stone bridge which connects new Regensburg to the older part of the city that wasn’t destroyed during the war, and you could also grab a bite to eat at the Regensburg Sausage Kitchen—you can’t go to Germany and not eat a sausage, it’s almost illegal!

Of course, you can’t forget the fun factor so you’ll need to hit up a classic festival with beer, tents, carnival rides and traditional lederhosen. The Gäuboden Festival (is a mega-event hosted in the thriving city of Straubing, in the heart of lower Bavaria. With over 1.4 million visitors annually (which is 31 times Straubing’s entire population) this festival will truly give you a traditional German volksfest experience. The event starts off with a city-wide parade where everyone dresses in traditional clothing and the float participants give candy, beer and bread to the audience—what more could you ask for in a parade? There is also a carnival that is open for 10 days that features large food tents, carnival games, and my personal favourite, special beer tents that provide traditional Bavarian folk music and dances accompanied by live brass bands. 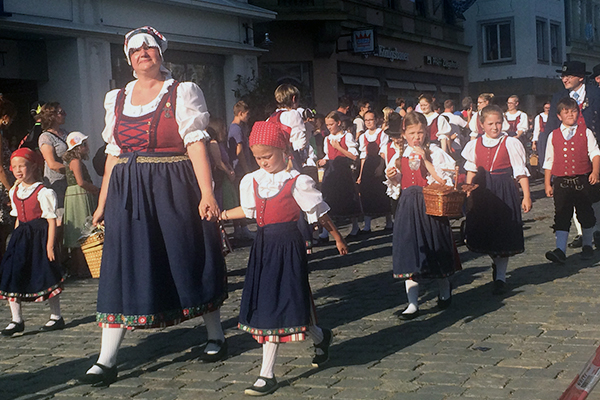 Locals from Straubing walking through the city during the Gäuboden Festival in traditional clothing. 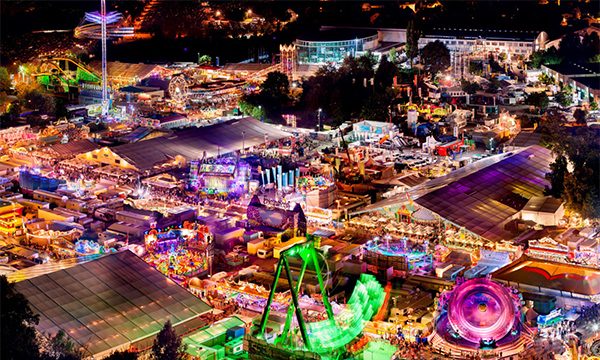 Gäuboden Festival buzzes day and night, lots of carnival rides too, but maybe be careful mixing a belly full of beer and rides? 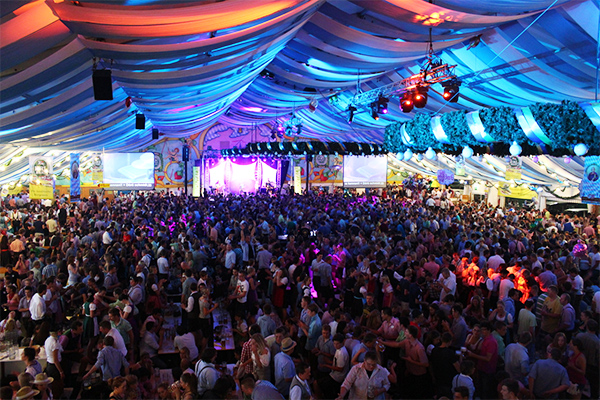 In a massive and colourful beer hall (entertained by infectious Bavarian music) during the Gäuboden Festival.

Going to a live play is always exciting—but nothing will compare to the excitement of seeing a dragon slayed in the city of Furth im Wald. Situated halfway between Nuremberg and Prague on the border of the Czech Republic, this little town has over 500 years of history to offer during its annual Drachenstich, the oldest folk play in Germany. What’s so amazing about this play is the dragon itself. It’s the largest robot in the world, walking on its own legs, and full of electronic special effects (what’s a dragon if he can’t breathe fire, right?). The play depicts the fate of this small town during one of their toughest years, the medieval Hussite War. Can the knight spear the dragon and save the girl, his town and everyone in it? You’ll have to see it to find out. 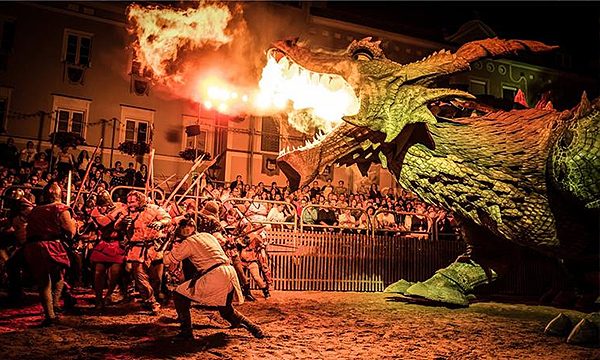 The impressive, and fiery, dragon from the Drachenstich play.

Germany features 90 nature parks, 14 biosphere reserves and 15 national parks. It boasts of spectacular landscapes from the Wadden Sea to the Black Forest and the Alps—all this in a country measuring about 850 km from North to South and 600 km from East to West. If you’re going to visit a country that is so green, you must visit one of their forests. The Arberland Bavarian Forest is centrally located in the Bavarian-Czech’s wild with unbridled woodland, which is unique to Europe. It’s home to over 2.6 million overnight stays from tourists, making it a very important destination in the Bavarian Forest. Take in a deep breath of fresh air while hiking or mountain biking through the most-forested region in Germany. 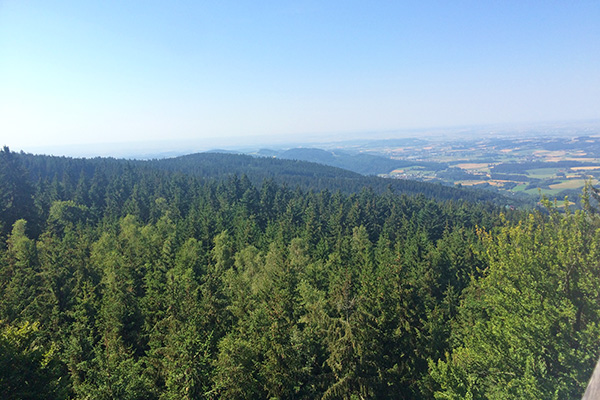 Taking in some fresh air while enjoying the gorgeous view of the Bavarian Forest.

If you’re looking to buy gifts or souvenirs to commemorate your trips, or even for the pure appreciation of their artistry, the Joska Crystal Factory should not be missed. You’ll be dazzled by all the whimsical shapes and colors inside and out of this iconic glass factory—you might even get the chance to create your own watering bulb by blowing glass. Make sure to pack them well in your suitcase for the trip home. 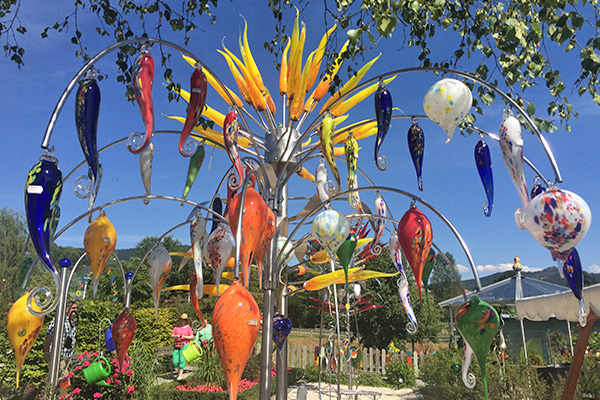 Outside of the famous Joska Crystal Factory—glass in an infinite array of forms and colors!

I’m pretty sure this goes without saying, but you should definitely indulge in the German cuisine even though it often gets a bad rap—which is actually unfair given the huge regional variations and the growing number of Michelin-starred restaurants in the South-West. Even if you’re not a fan of sausages, or don’t drink a lot of beer, no one could deny their extraordinary variation and rich creativity in baking, from dark rye to richly seeded and wholegrain breads, a huge range of cookies and pastries and, of course, pretzels which go hand-in-hand with a German sausage and pint of beer! 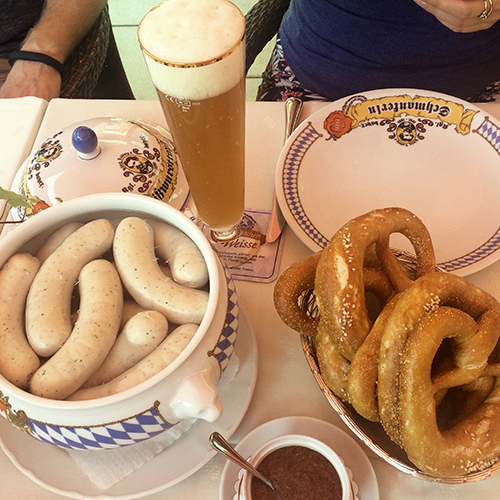 Some links for you to learn more or plan your trip