When you think of funerals, certain images may come to mind. For a lot of us, we think of black clothing, graveyards, and perhaps religious services centered around a burial or a cremation.

This is not the only way people deal with death though. We have heard of countless odd funeral practices throughout time. Think of mummification in Egypt or Viking funeral ships and human sacrifices. Odd death practices have been around for as long people have been dying, but you may be surprised to learn that in many places around the world today, they still exist.

From festivals to secret ceremonies, there are many strange ways to deal with death that still are still practiced today. And if just learning about them isn’t enough to satisfy your curiosity, some of them you can experience yourself if you visit the right places.

Tibet and some surrounding regions 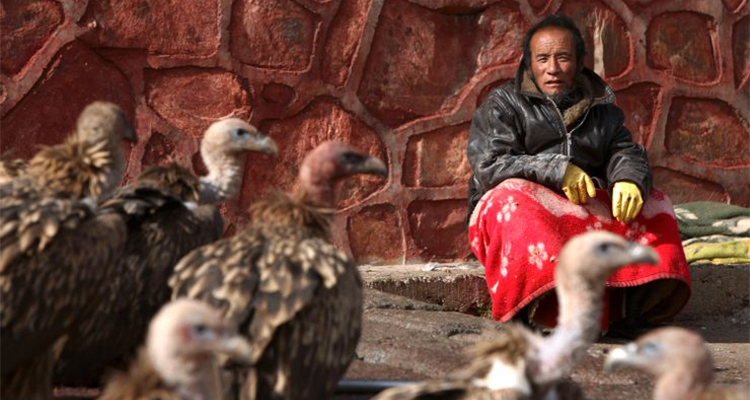 Those who practice Vajrayana Buddhism believe in the transmigration of spirits. To them, once someone is dead, the body becomes just an empty vessel. Now disconnected from a spirit, the Sky Burial is a way to dispose of a human corpse in the most generous way possible – by placing the body on a mountain and allowing vultures and other animals to eat it.

The generosity displayed in giving the body back to the elements is an important virtue for these Buddhists, showing compassion for nature by feeding animals something that no longer is being used. The funeral itself (that is, when the birds are eating) is normally witnessed by a monk and other onlookers.

This practice was a popular tourist attraction for many years but has recently become a controversial topic as many of those who practice Sky Burials do not like that their funerals are being used for entertainment. 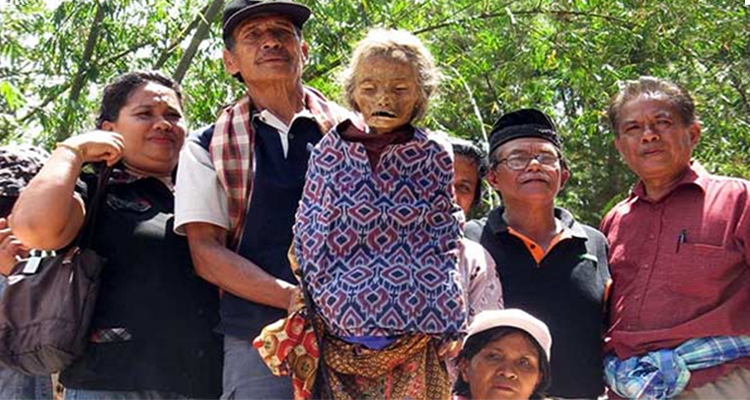 For the Toraja people, death does not occur when a person stops breathing. They believe a person to be alive (or ‘sleeping’) until their funeral ceremony is held. The body of the dead is embalmed and placed in their family house while they await the ceremony (which can take years) and they are symbolically taken cared of as if they were still alive.

The funerals are large parties that last for weeks, and the person is only buried on the 11th day of the ceremony. Only once the ceremony is complete is the dead considered to be truly dead. The bodies are then moved to a cave as their final resting place. Every year in August, the ‘Ceremony of Cleaning Corpses’ takes place, and all the bodies of the dead are exhumed, cleaned, dressed in new clothing, and carried around the village.

Tourism is a big part of the economy of Tana Toraja and pressures the locals to keep these traditions alive. Tana Toraja is currently on the UNESCO World Heritage Tentative Lists due to the longevity of the uniqueness of these traditions and is an experience you don’t want to miss if you ever find yourself in Indonesia. 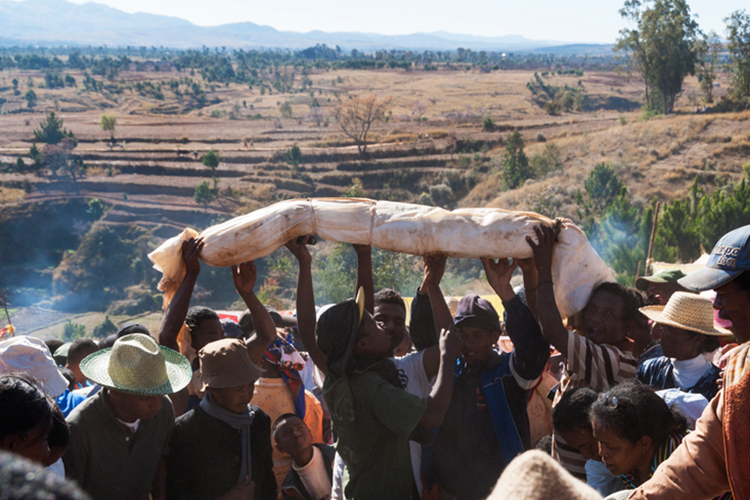 Funerary traditions are not always somber events. For the Malagasy people, the death celebration called ‘Turning of the Bones’ or ‘Famadihana’ is a joyous celebration with music and dancing.

Roughly every seven years, the bodies of ancestors are removed from the crypts that hold their bodies for cleaning. Once the bodies are wrapped in new silk, music begins, and the bodies are carried around town to be danced with. Large numbers of people dance and celebrate their ancestors. Some may even talk to the bodies and ask ancestors for advice. Life is celebrated. The festivities ends with a large feast.

Famadihana is not a celebration that involves many outsiders or tourists, generally just involving extended family and friends. There have been some occasions where travellers in Madagascar have been invited to join a Famadihana celebration, so while it is not impossible to participate in, the celebration is not meant to be a tourist attraction. 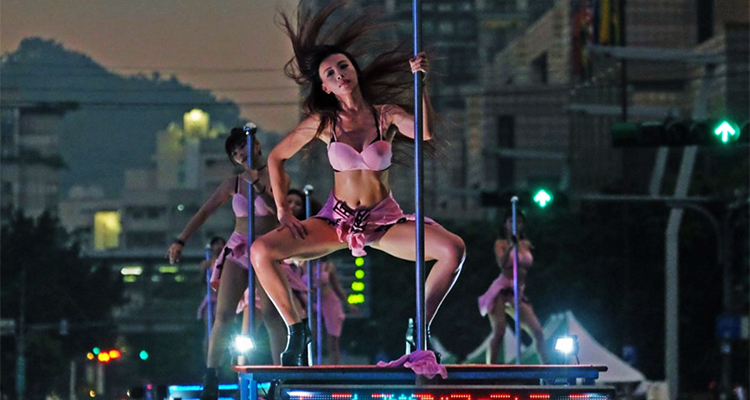 In Taiwanese culture, size matters. Small funerals are considered bad luck, indicating that the deceased was not loved in life and therefore doomed to suffer after death. The bigger the funeral, the better afterlife, so to ensure your loved one’s funeral draws large crowds, why not hire strippers!

Taiwanese culture looks at death as something to celebrate and not mourn, so to honour the dead and worship ancestors, large funeral parties take place in the streets of rural Taiwan. They involve music, dancing, flashing lights, and of course funeral strippers and pole dancers. An entertaining funeral draws in more guests, so the goal is to be as big as possible.

If you ever find yourself in the middle of a funeral procession of strippers in Taiwan, know that they are happy to have you there! 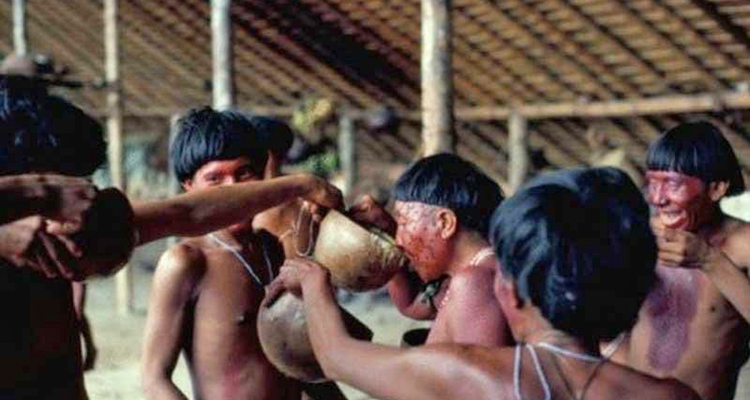 For many cultures, cannibalism has nothing to do with hunger and everything to do with respecting those being eaten. This is the case for the Yanomami people of the Amazon rainforest.

Once a member of the tribe dies, the body will be placed in the forest for bugs to eat until only bones remain. The bones are then cremated and added to a special soup made from bananas. The community then takes turns eating the soup. Through the practice of endocannibalism (eating family/community members), the Yanomami people believe that they keep the spirit of the dead protected as they go to the spirit world. After the ashes are fully consumed, the spirit is considered to be at peace.

While incredibly interesting to learn about, many of the Yanomami tribes are still uncontacted today, so these ceremonies take place mainly in secret. Due to the risks posed to travellers as well as to the Yanomami culture, it is not possible to visit this group to witness these funerals. 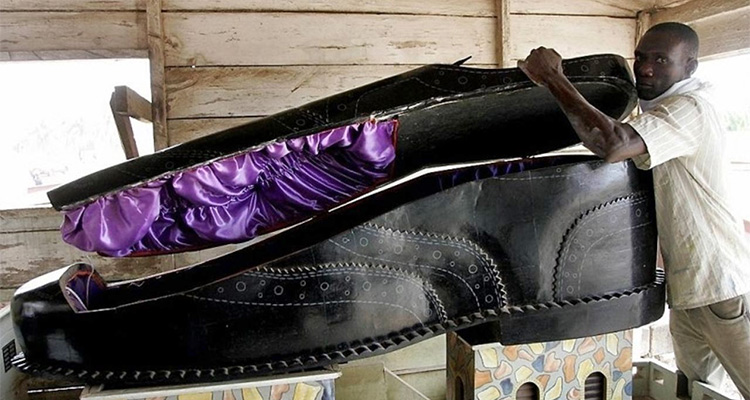 In Ghana, burring someone has elements of creativity and fun to it. This is because people are not buried in the traditional coffins that so many of us are used to. Instead, specialized carpenters are hired to create works of art to bury the dead in.

The coffins themselves are created to symbolize something about the deceased. This could be their profession, certain animals, or sometimes religious or symbolic shapes. This results in everyone being buried in a unique coffin. The practice of fantasy coffins is done because those in Ghana believe life exists past death, and past ancestors are thought to be able to influence the living. Using a unique coffin for burring someone ensures that the dead person looks back favourably onto those that buried them.

The shops that create these coffins exist across Ghana and are available for visiting. Some of the coffin artists such as Paa Joe have toured the world to show off their designs. While you may not be shopping for a coffin, the art in display in these shops and the work that goes into them can be enjoyed and photographed.

Various locations in China, the Philippines, and Indonesia 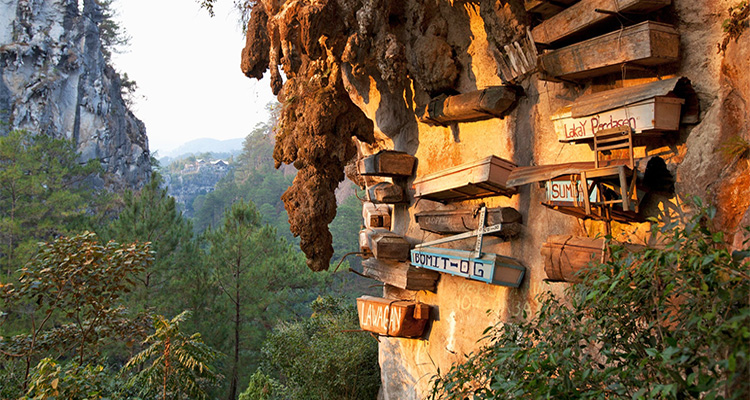 If the thought of being six feet underground is scary, perhaps being 130 meters off the ground is more appealing to you. For a few ancient minority groups in Asia, this was the case. Here, coffins were hung along the side of a cliff by either placing them on projecting beams or by placing them on natural rock edges. This practice was done for thousands of years, with the last coffin being hung in 1992 by the Sagada of the Philippines.

There are a few theories about why coffins were hung up high and not buried. One theory suggests that by placing the bodies in a high place it was easier for them to get to heaven. Another theory suggests that the higher location of the bodies allowed for the corpses to remain better preserved. There is some mystery surrounding how these cultures were able to get the coffins off the ground and onto the side of a mountain, and since very few descendants of these groups exist today, it may never be known.

Despite being placed there many years ago, the coffins are still around to see. Tourists have been known to travel to see the hanging coffins. After years of decomposing on the side of the mountain, the coffins eventually fall and may reveal the bones. You can visit Echo Valley in Sagada for a tour of this cemetery. 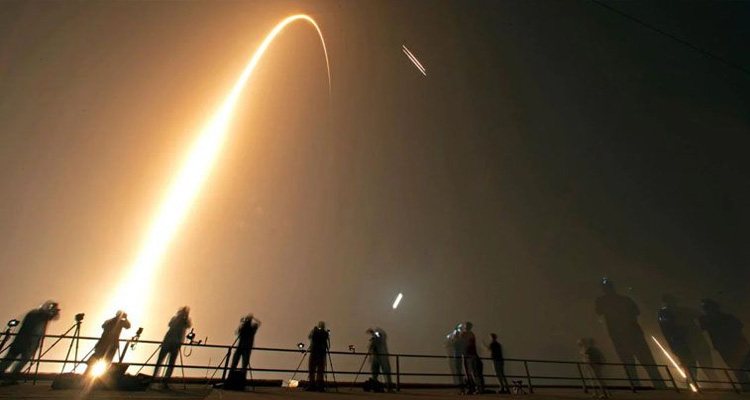 Perhaps the most futuristic of all funeral practices is the space burial. This was first done in 1992 by NASA where some of the cremated remains of Gene Roddenberry (creator of Star Trek) was brought into space on mission STS-52. Private burials began to occur in 1997, with the rocket “Earthview 01: The Founders Flight” carrying some of the remains of 24 people into space and orbiting earth until 2002. Remains are burned up in atmosphere upon re-entry and become a shooting star.

Today there are a few companies that launch remains into space, with destinations being either Earth’s orbit, the surface of the moon, or deep space. So far, orbiting earth has been the majority these burials, with only one successful lunar surface and deep space burial. More are planned to take place in the future. There is still much work to do before these types of funerals become more mainstream and accessible, but who knows, maybe by the time you die you will have the option to be launched into space.

Our resident anthropologist, because every good travel magazine needs at least one decent anthropologist. We love the approach Olivia's discipline brings to exploring different places and cultures. She's also passionate about gardening, historical documentaries, science in its many forms, all while planning her next adventure.