With a whopping 5007 Horse Power, the Devel Sixteen stole the show at the 2019 Toronto Autoshow Exotica. 16 cylinders and 4 turbochargers make for a $2.2 million face-melting machine. The Devel 16 has a 0-60 of 1.8 seconds and a top speed of just over 350 MPH, or 563 KM/H. To give some perspective, the Bugatti Veyron Quad Turbo V16 has 1,500 Horse power. 5007 Horse Power is simply beyond any person’s previous conception of a road legal vehicle. Powerful fighter jets have an average horse power of 20,000, so you are basically driving around in a quarter of a jet, slap some wings on this machine and you might just break the sound barrier.

Co-founder of Devel Motors, Mr. Al Attar, says they are “working to create the worlds most powerful production car”, and they have certainly done that. In 2018 the most power producation car was the Hennessey Venom F5, with a top speed of 301 MPH and 1,600 HP. The most mind blowing statistic here is that the Devel Sixteen more than triples the worlds most powerful producation car in 2018.

This shift in power will revolutionize the supercar industry. Bugatti, Ferrari, Mclaren and others will be forced to reinvent themselves to compete with the Devel Sixteen. Who knows what this new level of competition will bring in terms of the technilogical advancement of the auto industry. What new ways of creating power will the engineers discover in the attempt to outclass Devel Motors? 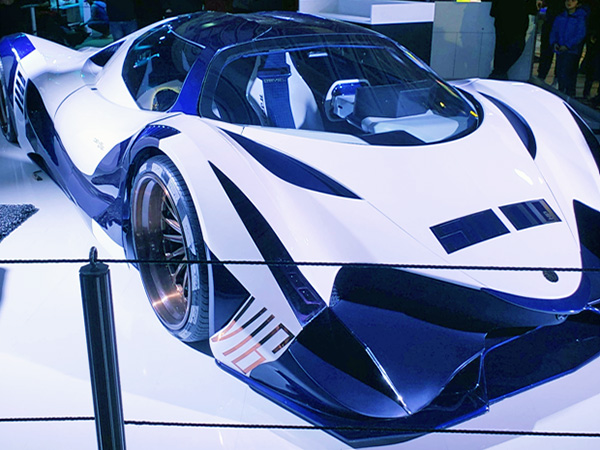 The stroke-inducing supercar prototype was first showcased in Dubai in 2017. The beta version made it’s way around Europe to demonstrate that Devel Motors has got game. The first production model made it’s way to Toronto in Febuary, 2019, thanks to Toronto’s popstar Drake, who showcased the car next to his very own yellow Ferrari LaFerrari. Drizzy brought the car to the 6ix for the music video of I’m Upset.

The Canadian International Autoshow was lucky to feature this powerful beast at the Metro Toronto Convention Centre. With thousands of cars, attractions, and square footage, the crowds descended into the depths of the Exotica Exhibit to witness the Devel in the flesh. Reading the specifications off the information board gave me the chills. Only a true dragster would ever be able to handle this much power. Without the sensativity of a pro, touching the gas pedal would probably propel you through your living room and into the backyard. Watch out kiddos! Daddy’s got a new toy!