Spa towns have been around for thousands of years, with civilizations choosing to settle around the naturally warm mineral springs due to their purported health benefits. So if you are planning a vacation, why not work in a visit to one of the world’s most beautiful spa towns?

Bath was once a resting place for Roman soldiers who were exhausted from patrolling Hadrian’s Wall. Springs beneath the city pump out 1million liters of geothermal water a day, which make it a hugely popular destination for tourists looking to relax. The preserved Roman Baths are still flowing with natural hot water, which is why it is one of the finest examples of religious spas which are still in existence today. If culture and history are your bag, then Bath is most definitely the place to be, as just a short drive away is the ancient site of Stonehenge.

Japan has one of the highest concentrations of volcanic activity in the world, which means it is home to thousands of natural hot springs, otherwise known as onsen. Nagano has over 200 hot springs alone, with some of them home to the world-famous bathing snow monkeys. The resort of Hakone is a beautiful onsen town with plenty of natural hot springs and jagged, misty mountains, which makes is a favorite for many Japanese people. It is close to Japan’s highest mountain, Mt Fuji, and can be reached by taking a one-hour train ride from Tokyo.

One of the most popular tourist destinations in Iceland, freshwater and seawater combine at high temperatures 2,000 meters below Reykjavik, collecting silica and minerals as it pushes its way to the surface. With temperatures of between 37 degrees Celsius and 40 degrees Celsius, the lagoon is beautifully warm which is especially good if it’s snowing outside! In the unlikely event that you want to do something other than wallow in the lagoon, join one of the many whale watching excursions or visit the famous bridge between continents. If you time your visit right, you may also get to see the stunning northern lights. 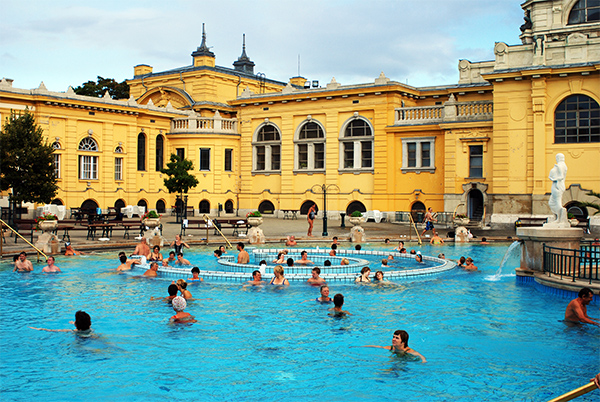 Holding the title of “City of Spas” since 1934, Budapest baths and pools benefit from 120 hot springs which provide over 70millionliterss of thermal water a day to the area’s pools and baths. Enjoyed by Romans from the early 2nd Century, bath culture in Budapest really took off when Turkey occupied Hungary in the 16th Century. Choose from one of the city’s 15 public thermal baths, such as The Rudas Bath which holds popular night parties at the weekend, or if you’re feeling antisocial, visit a luxury hotel to relax in one of their private spas. 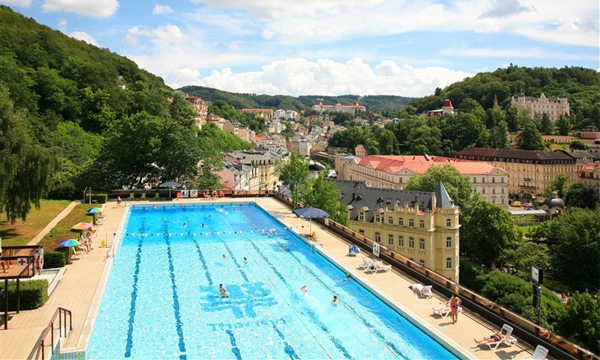 Located in the West Bohemia region of the Czech Republic, the numerous thermal springs of Karlovy Vary have ensured its popularity as a relaxing holiday destination since the 19th century. With its elegant colonnades, unique architecture, forested valley and rich culture, Karlovy Vary is a truly stunning destination, even before you get to the 13 hot mineral springs! Should you want to explore further afield, an hour’s drive away is Rozvadoz, home to one of the top poker festivals in the world, while just 40 minutes in the other direction is the Premonstratensian Abbey of Tepla. 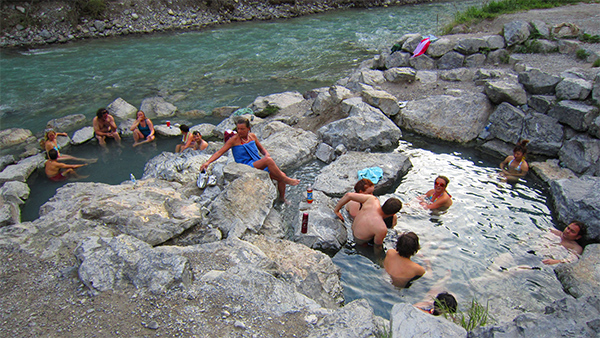 While there are a wealth of hot springs to choose from in Canada, Lussier Hot Springs is one of the few which remains completely undeveloped, creating a 100% natural experience. Located in Whiteswan Provincial Park, the springs can be accessed by taking a short hike down the Lussier River, which feeds directly into Whiteswan Lake. This area had been used as a seasonal hunting camp by the K’tunaxa (Koottenai) native people from as far back as 5,000 years ago and was also used in the 18th century by trappers, prospectors, and guides working in the area.

Greece may be known for its rich history and famous philosophers, but it is also home to several active volcanoes, making it a hot spot for hot springs. Head to the Nea Kameni volcano and take a dip in the hot springs to relax your muscles after your hike. You can also take a boat to one of the volcanic islands in the middle of Santorini, Palia Kameni, where you can jump overboard and swim through the geothermal waters to get to the mineral-rich mud of the bay. After soaking in your mud bath, you can swim back to the boat through the hot springs feeling super refreshed!

Happy spa-ing to all!